May 15 is Endangered Species Day. Why is th 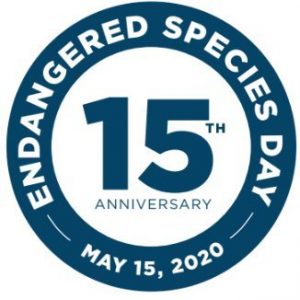 is an important topic? Healthy ecosystems depend on plant and animal species as their foundations. When a species becomes endangered, it is a sign that the ecosystem is slowly falling apart. Each species that is lost may trigger the loss of other species within its ecosystem. True conservation has to be a lifestyle, not just a reaction, and raising kids to understand why nature matters is the best way to instill the appreciation that leads to responsible habits. Knowing how it happens and how to prevent it is our responsibility, which is why we have created activities that all have an Endangered Species theme. These activities include things that will help your child develop fine and gross motor skills, problem-solving and engineering skills, and can help them engage in cooperative play, while fostering creativity and perseverance. Each theme also comes with recommended literature and movie connections. Feel free to throw in your own activities that might relate, and don’t forget to post your results to social media and tag @discoverymuse to share with everyone else!

For this activity, you’ll need to collect some paper, coloring materials, glue/tape, and any additional arts and crafts supplies (like googly eyes, pompoms, yarn, twine, etc).

May 15 is Endangered Species Day, but it’s also Pizza Party Day! We came up with a fun way to celebrate both!

But first! You must know a thing or two about Food Chains and Food Webs.

A Food Chain shows a food relationship (and how the energy flows) among plants and animals in a specific area or environment. A change in one part of a food chain might affect the rest of the food chain.

A Food Web shows the interconnected and overlapping food chains in an ecosystem.

In our pizza, the dough is made from wheat – which is a plant. The tomato sauce also comes from a plant – tomatoes and herbs. The plants get their energy from the sun. I will also add onions and peppers to my pizza, which are plants, also. Plants are considered Producers in the food chain.

The next thing we add to the pizza is cheese. Cheese comes from milk from cows. Cows are herbivores who eat grass to get energy. Anything that eats anything else is called a consumer.

I am also adding pepperoni, which comes from pigs. Pigs are omnivores, which means they eat meat and vegetables. Pigs and cows are consumers.

Finally, I am going to sprinkle some mushrooms onto the pizza. Mushrooms are fungi and considered decomposers – they break down things and turn them into soil and nutrients for growing things.

Now imagine that one of the things in the food chain became endangered. What happens to the other animals in the chain?

Animals can become endangered for a variety of reasons. Below are the major causes:

When a species becomes endangered, it impacts the whole food web, even if they’re at the very top. If a producer (plant) is wiped out, the animals that eat it may die, also. Or they will need to find a new plant to eat – which might cause that new plant to be overeaten! If a consumer is lost, there may be an overabundance of whatever it used to eat – imagine the planet being taken over by bunnies! All the parts of the food chain/web are important and play important roles in the lives of others.

Get some of those wiggles out while learning a little about the effects that can cause animal extinction. This will be a variation of musical chairs that can lead to conversations about how to to help/prevent endangered species.

Because we know you’re stuck at home with limited access to movies and books, we tried to compile a list that connects to today’s theme that you might already have in your collection or be able to access online. These include: